Connect with us
UK Athletics

Helping Kentucky to a 10-win season in his first as a Wildcat in 2021, Will Levis passed for 3,028 yards and 24 touchdowns – both top 10 single-season marks in program history. In his performance, Levis displayed that he has the arm, size, toughness, intelligence, and enough athletic ability to play in the NFL, but was relatively unknown nationally.

Starting this past Spring, the hype started to grow around Levis as he started to be seen as a top quarterback prospect, even the top prospect in some cases. Pair that with the historic expectations that Kentucky football had in the preseason, and Levis set out on a mission to be the No. 1 pick.

With the Wildcats finishing the regular season with the worst offense in the SEC and an underwhelming 7-5 record, the national college football media and public opinion have dialed back on the senior quarterback. Has the NFL?

Not according to T.J. McCreight, who has spent 30 years in the NFL as a regional and national scout, director of pro personnel, and personnel executive for four different organizations.

McCreight said that if he was in charge of an NFL team that needed a quarterback, his top choice would be Levis, and he is not alone in that thought.

With four NFL scouts that McCreight trusts, he performed an impromptu poll, and three of them agreed with his thinking that Levis is the best quarterback in the draft.

One NFC scout said, “This [season] is an audition for him to go to a poor NFL team. He proved he can take a beating and keep getting up.” Another NFC scout added, “It is a miracle that he keeps playing every week after all of the hits he takes. He is more banged up than people think — much more.”

Looking at his competition, CJ Stroud (Ohio State) and Bryce Young (Alabama), they experience very little conflict/stress in a game given the teams that they play for. McCreight argues, with Levis playing for Kentucky, he doesn’t have as much talent around him to cover for his weaknesses.

While the national media isn’t as high on Levis as they once were, it sounds like the NFL Draft decision-makers are, as they look back at last season and the toughness he has shown this season.

Some of the most athletic people in the world are professional wrestlers, and that level of athleticism is not found in abundance. This is why the WWE “Next in Line” program was created, a NIL program launched in December that serves to recruit and develop potential future WWE Superstars.

One of the most recent college athletes to be signed to such a deal is Kentucky football running back, Dee Beckwith, which was announced last week. Standing 6-foot-5, 235-pounds with a reported 4.5 40-yard dash time, he fits the mold of big and athletic.

Beckwith is not the only Wildcat in the program, as there are two others. UK women’s track and field hurdler Masai Russell was a part of the WWE’s first NIL class, and former Kentucky defensive lineman Abule Abadi-Fitzgerald signed with NXT, after a couple of tryouts with the WWE.

The WWE NIL program is primarily used for a fast track to potentially signing with the WWE upon completion of the program. However, within that, the program gives athletes access to their training center in Orlando, where they provide guidance in brand building, media training, communications, live event promotion, creative writing, and community relations.

This is a unique opportunity for Beckwith, giving him another path as an athlete outside of football.

Owen
@75toRupp
@KySportsRadio Here’s a couple other thoughts that’d be neat even though I hate the new wildcat. https://t.co/ejr2K0Ybhm 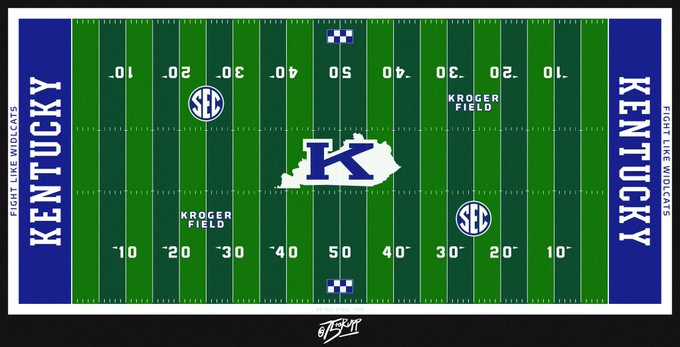 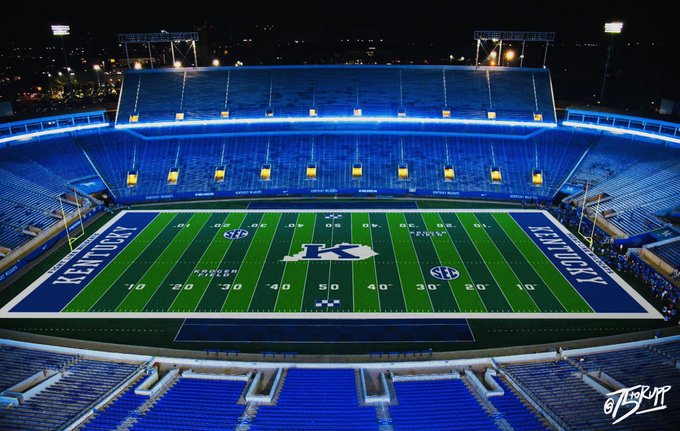 On Wednesday, the media had a chance to talk to six out of the seven new transfers that transferred to Kentucky during winter break, with the exception being Jantzen Dunn (Ohio State). Each transfer is expected to come in and play significant roles, as they fill roster gaps.

With the influx of veteran talent to go alongside the young weapons that Kentucky displayed last season, the goal is to improve on an underwhelming 2022 season.

Let’s briefly look at what each player had to say in their introductory press conferences.

Committing to Kentucky in mid-December, Devin Leary has only been on campus for three weeks and is still rehabbing from his surgery for a torn pectoral muscle he suffered back in October. However, he is still trying to make an early impact on his new team.

“I am very happy to be here, but at the same time, you know, it’s an honor and privilege to be here. I need to prove to them that I’m going to put in the work that it takes, you know, a lot of time and that I take it very serious, but at the same time it’s grabbing those guys on the side and, you know, diving into the playbook, doing extra film, and just really building that camaraderie, like right now.”

In Liam Coen’s ‘re-introductory’ press conference, he talked about how important Chris Rodriguez and his ability to guarantee positive yardage has been to Kentucky. Now graduated, Coen and the program had to find another high talent back, which they found in the transfer portal.

Coming from Vanderbilt, new running back Ray Davis was tabbed as a four-star transfer and one of the best running backs in the portal. Kentucky will be Davis’ third stop in college football as he played at Temple University his freshman and sophomore years and most recently at the University of Vanderbilt for his junior and senior years.

One reason why Davis committed to Kentucky is he thinks UK was missing a few pieces towards the end of the year, that he thinks he can help with and get the Cats’ to compete in the SEC Championship

“Offensively, just knowing that they were missing just a few pieces once the season ended and I felt that, you know, if I come in and try to earn my spot, earn those reps, and try to get the starting job. I think I could help out the team and get us through that threshold of potentially competing for an SEC Championship,” Ray Davis says during a media interview.

Tanner Bowles was one of two offensive tackles that Kentucky landed in the transfer portal. Bowles, who is from Glasgow (KY), recently transferred from the University of Alabama to Lexington. In four seasons with the Crimson Tide (including a redshirt season), Bowles never became a starter, but appeared in all 12 games this season for one of the best offensive lines in the SEC.

Marques Cox was the second offensive tackle that Kentucky added from the transfer portal, coming from Northern Illinois University as a redshirt junior. Cox, like Devin Leary, suffered a season-ending foot injury, four games into the season when NIU faced off against UK.

As a proven veteran, Cox knows that the offensive line will have to improve this season, and he will bear much of that load. If they can succeed, Kentucky will be more capable of using their offensive weapons.

“Just me and Tanner (Bowles) helping improve the offensive line and offense so they got weapons,” Marques Cox says during a media interview. “We got key players to do so, so it is just fixing everything.”

Now to the defensive side of the ball. One of Kentucky’s latest additions from the transfer portal was defensive tackle, Keeshawn Silver from North Carolina. Ranked as a five-star recruit in the 2021 class, the talent is there, but he could never get to a healthy playing weight at North Carolina.

One reason why Kentucky added him was due to Justin Rogers’s transferring to Auburn, leaving UK in need of another defensive lineman, which is where Silver comes in. Since arriving to campus, he feels like he has been able to build some great chemistry with his teammates.

“We talk daily, it’s really like the same things at Chapel Hill,” Keeshawn Silver says during a media interview. “I mean the guys, we bond together, have a good time, they like to have fun, I like to have fun.”

Finally, the last transfer that was interviewed was defensive back, JQ Hardaway, coming from Cincinnati. A native of Columbus, Georgia, Hardaway is “happy” to be in the SEC, a conference many poked fun at him for not joining out of high school.

The SEC is the highest level of football in the country, but Hardaway believes that he belongs and is confident in his skill set.

“I’m just a ballplayer, man, I feel like I am very confident in myself,” JQ Hardaway says during a media interview. “I like to have fun, I got kind of a swagger on the field, I would say. I’m just very comfortable, I feel like I can be myself, I don’t have to be anyone. I just kind of let my talent speak for itself.”

Over the last four seasons, Kentucky has sent three transfer corners to the NFL – Lonnie Johnson (Garden City CC), Kelvin Joseph (LSU), and Brandin Echols (Northwest Mississippi CC) – and Hardaway committed to Kentucky with that in mind. Will he be the next?

Kentucky added some talented transfers this off-season and it will be interesting to see how they will have an impact on the team. Several questions should be answered over spring football, and hopefully, this group can help lead Kentucky to a better record in 2023.