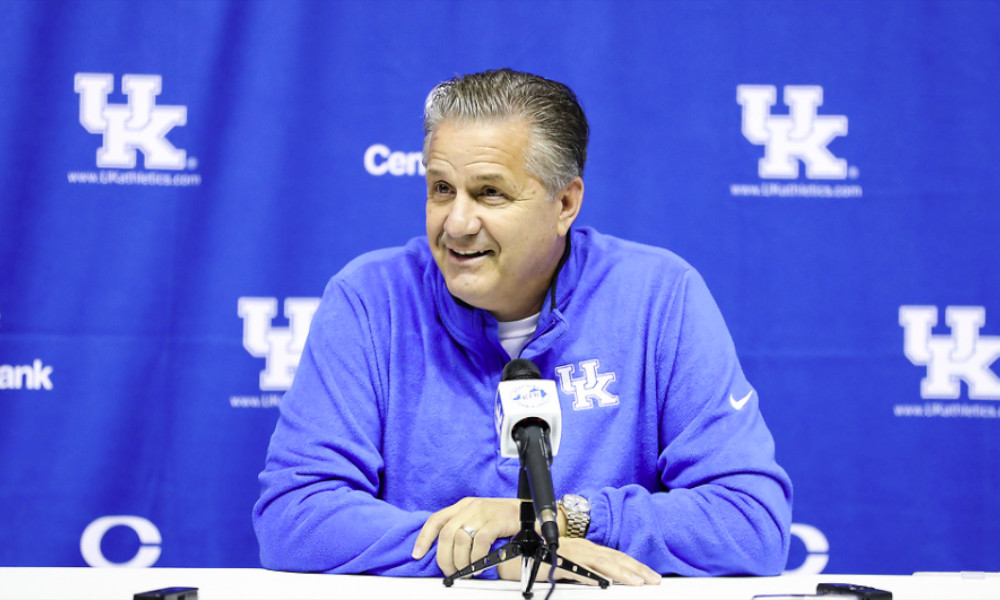 On Friday, John Calipari talked to the media for just the second time since the upset loss to Saint Peter’s, this team with Mike Pratt and Dan Issel on ESPN 680.

Let’s take a look at what he had to say.

Oscar Tshiebwe announced his return to Kentucky on Wednesday, making him the first National Player of the Year to return to college since Tyler Hansborough in 2008. Calipari talked about Tshiebwe’s decision-making process and just how close he was to leaving.

Calipari noted that Tshiebwe had prayed and asked God, “Why did I win every award and did all that I did and not be a lottery pick?”, with God answering, ” you have unfinished business”.

Now, with that said, “there were people in his ear trying to get him to leave until the very end, up until he sat in that chair [on SportsCenter]”. At one point, Tshiebwe even recorded two videos for both a return and a departure to the NBA.

Oscar returns with two goals in mind, to win an NCAA championship and be a lottery pick.

Sahvir Wheeler and the Rest of the Current Roster

“He had a hell of a year until he got injured. Then he gained some weight and didn’t play as well, BUT, he is still that guy,” said Calipari about his SEC assist leading guard, Sahvir Wheeler.

Calipari noted that Wheeler is “the difference” and will work to get him steady and to keep improving.

As for the rest of the current roster, “with Sahvir, CJ, Cason, Chris, Damion, Lance, and Oscar. WOW,” Calipari said.

One notable exclusion from that list is Keion Brooks, who has put his name into the NBA Draft while retaining his college eligibility. If Brooks were to return, he would become just the second out-of-state player to stay four years in the Calipari era.

Since taking the position at Kentucky, Calipari has always said, “Kentucky isn’t for everybody.” He has proved that, being very selective in the players they go after, from high school and the transfer portal.

When asked about finding guys that fit the Kentucky culture, Calipari said “What these kids are hearing [from other schools] is, ‘you’re coming here to score 25 a game’, ‘you’re going to play every minute’, ‘I’m starting you from day one’, ‘you don’t worry, we will build around you’. You come here, and it is all of us together… so that’s not what they hear [from Kentucky].”

Calipari when on to specifically talk about finding guys from the transfer portal, saying, “It can’t be ‘I,m just worried about what happens for me’. It’s gotta be like Kellan, It’s gotta be like Oscar… They fit what we’re about”

“I don’t want to start a relationship on a lie,” Calipari said when talking about recruiting and not promising anything to players. Calipari has never called out a player or those surrounding them, but this quote seemed to correlate to the Shaedon Sharpe situation.

When asked about Sharpe, Cal noted that he is still consulting with him and his family, “He was in class today. Nothing has changed in the last two months in how we go about this. I’m talking to his mother and father, and we’re talking once a week. THEY will play a part in this.”

When Calipari said “they”, he was seemingly referring to Sharpe and his family having a say in the decision, making it seem like Dwayne Washington, Sharpe’s advisor, wants to control the situation.

After his camp saying for months that he would play next season, what changed? “What changed is, he was coming back, that was the plan. But all of a sudden some circumstances change and maybe he can be picked in those early, early picks, maybe he can’t,” Calipari said.

Despite all the controversy, Calipari iterated this is not done, “He signed up for classes, both summer and fall. He put his stuff from his room in the basement of the lodge, Kids that are coming back put they’re stuff down there. We don’t know… He may do this, but it’s not done.”

“Shaedon knows I want to coach him. Shaedon knows that Oscar is coming back. Don’t let all the negative stuff affect your decision”, Calipari also said.

Calipari acknowledged the fan frustration from losing to Saint Peter’s and the Sharpe situation saying, “We have unbelievably strong fanbase that’s everywhere in this country, but when things don’t go right, sometimes they get mad.”

Specifically on the Saint Peter’s game, “Did I grieve? Did I take it hard? What?1? I have never had a team do that in my career… But I’m done with it. It’s next.”

Calipari understands the frustration and takes it, “I get it and I know when people are mad they say stuff. That’s fine. Part of the tax you pay to be the Kentucky coach is that

With that said, Calipari doesn’t want that frustration to hinder the program going forward, saying “let’s not hurt recruiting.”

Calipari ended the interview talking about the team’s visit to Dawson Springs, and talked about wanting to be remembered for more than basketball. “I’m hoping when my time has gone people can look back and not just be about all the winning and all the Final Fours and hopefully more than one national title and all the other stuff that they say more than that, that program helped everybody within the Commonwealth,” Calipari said.

Listen to the entirety of the interview on most podcast platforms or by using the link below.