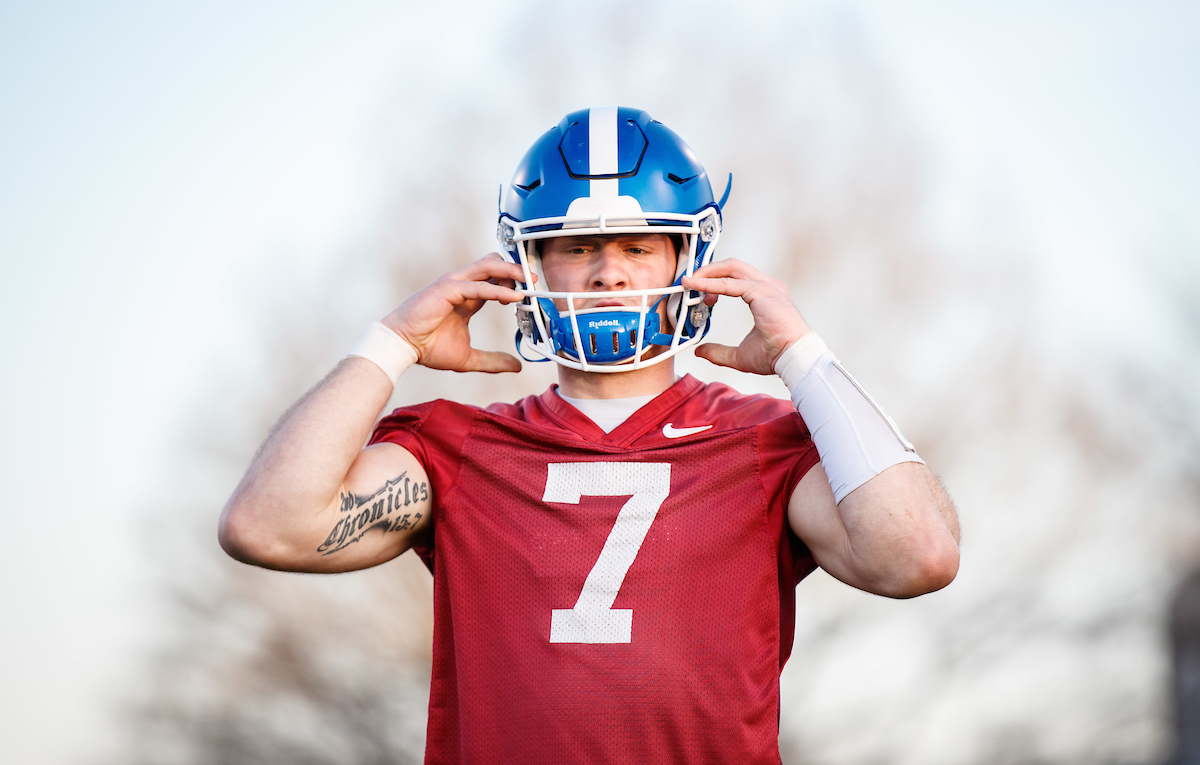 Today’s spring game was cold and for about 40 minutes, looked like it was going to be a whiteout. However, 40 minutes later it looked much more “springish”.

Despite the weather, the Big Blue Nation got their best look at the Kentucky Football team so far. So let’s break it down.

Will Levis Has Improved

The offense came out with a bang on the first drive. Will Levis completed all four of his passes for 41 yards, with Chris Rodriguez and JuTahn McClain adding in 21 yards as they went on to score with ease. Levis even went for a touchdown dive towards the end of the drive, which Stoops did not particularly like.

It has been a long time since Kentucky has had such a talented quarterback. Despite a limited playbook, there is a lot to be excited about what Levis can become this season.

Kentucky lost their top three receiving options from last season and the 3,000 yards of offensive production that they were responsible for. However, they have brought in several talented wideouts via recruiting and the transfer portal.

Virginia Tech transfer Tavion Robinson and true freshman Dane Key have been the stand-out receivers in spring practice and that was only solidified after today. Both caught 20-yard passes and showed their ability.

Robinson looked a bit like last season’s Robinson (Wandale) at times today. He notably moved well after the catch, showing his elusiveness and ability to get extra yards. Finishing with 3 catches for 42 yards.

Key, the top-rated prospect in the state of Kentucky in the class of 2022, made some spectacular catches including this dart from Will Levis for a touchdown.

With that said, there were several dropped passes that were on target. If Kentucky wants to have depth at the receiving position, this does need to be cleaned up.

Overall, with 22 different players making a catch today, Kentucky is in much better shape with its passing game compared to recent years.

Chris Rodgriguez looked good, but as proven as he is he was only in for one drive. That gave way for Mike Drennen and JuThan McClain today, with each performing well.

Coming out of high school, Drennen was a four-star top-300 recruit in the 2020 class. Understandably, expectations have been high, but they have not been met. Today, Drennen came to play. Showing some impressive versatility and ball skills, he impressed with 10 carries for 43 yards, including two touchdowns.

McClain looked to be in much better shape and showed some nice runs today, totaling 6 runs for 24 yards. His game seems to fit better within Rich Scangarello’s offense as well, giving him the ability to go wide and use the field.

Expect both players to contribute this season and looking into the future, this could be a dangerous combination for SEC defenses.

Defense Struggled but Had A Bright Spot

On Wednesday, Brad White voiced his frustration with his defense following practice. Early today, he had plenty to complain about today, but with good reason, being a general lack of depth.

With that said, as the scrimmage went on, the defense was able to find some footing, notably redshirt freshman Jordan Lovett. The six-foot-two in-state product, totaled nine tackles, two pass breakups, and a forced fumble.

Until the defense is able to get some of their key pieces healthy, they are not going to look very good.