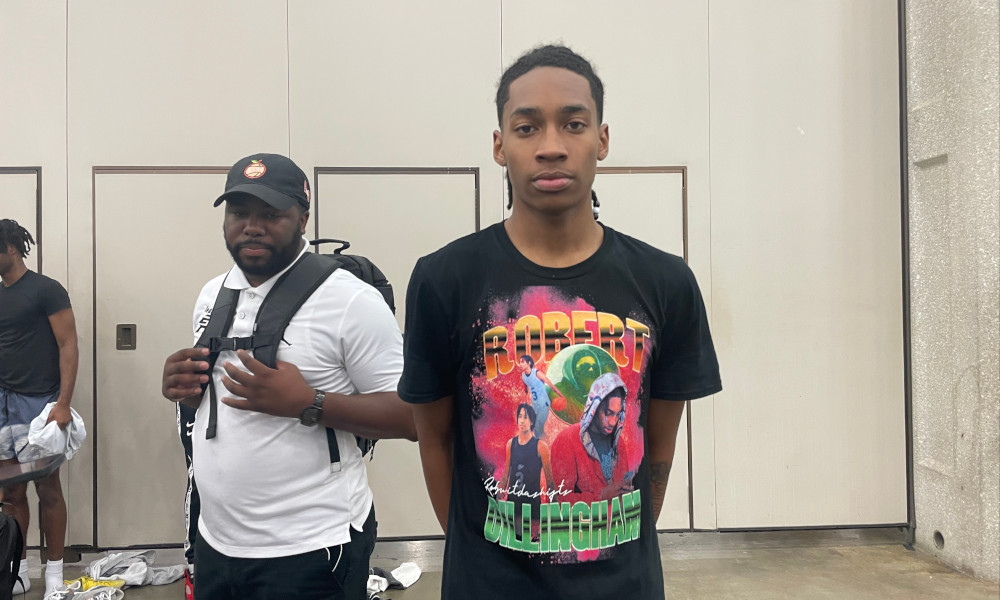 This past weekend at Nike EYBL’s Louisville session, Dillingham showed his ability to score at all three levels, showcasing his speed, finishing ability, ball-handling skills, and perimeter shooting which collectively make him the offensive weapon that he is.

Averaging 22.4 points and 2.6 assists per game, Dillingham was one of the leading scorers over the weekend, doing so at a very efficient clip, shooting 56% from the field and 45% from three.

Another thing fans will like in addition to his electric style of play is his dog mentality and toughness. Dillingham did not back down against anyone or any challenge, reminding me somewhat of Tyler Ulis.

With all momentum trending towards Kentucky in his recruitment, and reports saying he is ready to make a decision, I caught up with Dillingham for an interview. Let’s recap what he had to say.

When you reopened your recruitment following your decommitment from NC State, Chin Coleman told you, “I’m not going to lose you this time”. What does it mean for Kentucky to be so interested in you?

“It definitely means a lot because they were heavily recruiting me before I committed to (N.C.) State, but that doesn’t really lock anything down. I still have my recruitment open to everyone.”

Dillingham also added that he felt a lot of pressure to reclassify, which he is confident he will not do, as he wants to add to use this year to add to his slender frame. With his commitment, he feels like a lot of that pressure will be lifted.

As far as the schools that Dillingham is referring to, the most recent five that have been in contact include Memphis, Kentucky, Louisville, USC, and Arkansas. Saying he”loves” Penny Hardaway at Memphis, and talks to Coach Nolan Smith and Kenny Payne at Louisville.

How does the staff see you fitting into the roster if you were to commit to Kentucky?

“Really just being an impact player as soon as I come in. I’m pretty sure because that is what I talked to them about. He (Chin) said if DJ were to go there, we would both be impact players, but that is his word he gave me if I was to come there.”

Is playing with DJ Wagner an Intriguing Option? What would it be like?

“For sure. I feel like I’m an unselfish player and can play with anyone and adapt to how they play. He’s a bucket just like me. Playing with Aden (Hollaway, Team CP3 teammate), it’s the same thing. I let him hoop, and I can play with anyone who is a smart guard, honestly… He is a great player and I feel like me and him together, we are both playmakers, and we can both play off each other.”

This is true and good awareness by Dillingham. After watching both guards in person this past weekend and seeing their ability to play on or off the ball, they could share the point guard duties.

Known as being one of the best offensive playmakers in the class, what are you looking at to expand your game?

“Being a leader and getting bigger, being able to take contact and stuff. Becoming a better pro.”

While a June 24th commitment date has been reported, Dillingham says that is not set in stone, but he has his announcement set for this month and all momentum is trending towards the Cats.

If you hadn’t already, familiarize yourself with Dillingham’s electric style of play and watch Brian Thomas’ breakdown. Before this Spring when Calipari and Co started regaining traction on the recruiting trail, much of the Big Blue Nation was not satisfied with basketball recruiting.

Much of this was a result of some misfortune. Some of that misfortune is due to unique situations such as family/high school coach hires – as was the case with Cade Cunningham and James Wiseman – but some was due to the reluctance to adapt to the current recruiting landscape.

Chapman didn’t name any names, leaving it unclear who these recruits may have been, but still an interesting take by the former Wildcat. The Kentucky Wildcats have recruiting momentum in both the football and basketball programs, but today John Calipari and Co were the ones to receive the latest commitment, five-star center Ugonna Kingsley.

Kingsley’s commitment comes off the heels of a visit to Kentucky back in July, where all of his boxes were checked and he felt at home in Lexington. Kingsley chose Kentucky over the Kansas Jayhawks, Memphis Tigers, Oklahoma Sooners, and others.

Kingsley is one of the fastest-rising prospects in the country, first appearing in recruiting rankings back in late May. Two months later, Kingsley was ranked as a top-25 prospect and one of the best centers in the 2023 class.

With that said, Kingsley is no longer with the 2023 class, he would reclassify in late July. With his reclassification, Kingsley now stands No. 39 in the 2022 247 Sports prospect rankings and pushes Kentucky nine spots to No. 2 in the team rankings behind only Duke.

Due to the Shaedon Sharpe saga, the Big Blue Nation is likely to be a little wary – understandably so – of Kingsley’s reclassification, but this is a different situation.

While Kingsley is very talented, he does not yet possess the talent level of a projected top-10 pick coming out of high school. With that assurance, Kingsley’s reclassification is a benefit for himself and the Kentucky basketball program.

In his first year in Lexington, Kingsley will be allowed sit and develop behind reigning National Player of the Year Oscar Tshiebwe, then take over in 2023-24 when Tshiebwe is expected to be in the NBA Draft. Kingsley’s early arrival will also give Kentucky some insurance if a frontcourt player were to go down with an injury.

Despite both of his parents being under six feet in height, the Nigerian native possesses a 6-foot-11, 195-pound frame, and an impressive 7-foot-5 wingspan. Given his physical gifts, Kingsley is a natural on the defensive end and is a high-level rim protector. Overall, he is one of the best defenders in high school basketball, but his lack of strength can hurt him at times in the post.

On the offensive end, Kingsley has impressive footwork and shows the ability to score consistently around the basket. Outside of that, shooting, passing, and dribbling are all areas in need of improvement.

In early June, Kingsley admitted to On3’s Jamie Shaw, “I have been wanting to go to Kentucky all my life, even before coming to the states.”

Now, Kingsley has made his dream a reality and Kentucky is bringing in one of the best rim protectors they have had in recent memory.

*Also posted on A Sea of Blue In the last two months, Kentucky has secured commitments from top-10 recruits Justin Edwards (No. 3) and Robert Dillingham (No. 6) in the 2023 class. However, on Tuesday night Kentucky’s first commitment in the class, Reed Sheppard, was the one to make a statement.

In a high-profile game televised on ESPN, Sheppard faced off against Strive for Greatness, a grassroots team who featured top-five prospects Mookie Cook and Mackenzie Mgbako, Bronny James (LeBron James’ son), and his future teammate Dillingham.

Out of all the stars on the floor, Sheppard shined the brightest, going for 16 points, nine rebounds, and four assists to help lead Midwest Basketball Club to a 78-67 victory over the star-filled Strive for Greatness.

Sheppard is a five-star in his own right but ranks between 20th to 40th depending on which service you look at, but showed that he may be better than his ranking indicates.

Check out this short highlight video of Sheppard’s performance!